Hamilton is known as the city of waterfalls but those aren’t the only epic hikes in the city! Chances are you haven’t heard of the unique caves and crevices that are waiting for you to explore them. If you’re looking for some awesome hiking trails in Hamilton, head to the Eramosa Karst Conservation Area!

Some Background on Eramosa Karst

To start off, you’re probably what in the world is an Eramosa Karst? Eramosa’s Karst? Karst what now? Not to worry, I thought the same thing when I first visited.

Karst is a landform created by the dissolution of soluble rocks (for example, dolomite, gypsum and limestone) with underground drainage systems that typically form sinkholes and caves. These distinct landscapes form after thousands of years as rainwater picks up carbon dioxide from the soil, creating a carbonic acid that slowly eats away at the bedrock to create tiny fractures that eventually form these intricate webs of subterranean springs.

FUN FACT: The term ‘karst’ comes from the Kras region of Northeastern Italy and Slovenia which is well known for its caves, springs and sinkholes!

The Eramosa Karst is significant to Ontario as it’s said to be the best example of karst topography within the entire province! It’s called the Eramosa Karst as this area is crossed by the Eramosa Escarpment. It’s similar to the Niagara Escarpment in that they both feature dolomites and what’s known as the Lockport Formation, another important geological landform. However, it’s much smaller than the Niagara Escarpment in that it’s no taller than 10 metres in any section.

Because of this significance, the province of Ontario donated approximately 188 acres of land to the Hamilton Conservation Area in 2006 and 2007. With the City of Hamilton adding approximately 4 acres, this new conservation area was established and later opened to the public on June 20, 2008. 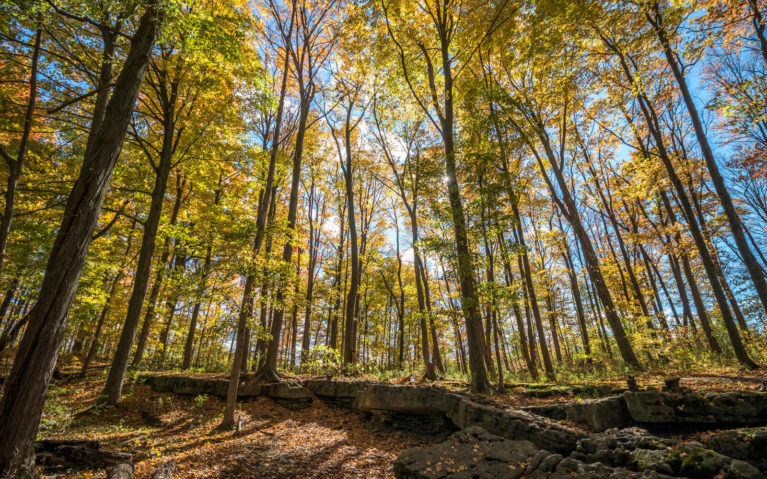 While it’s fairly common to find karsts in the northern part of the Niagara Escarpment along the Bruce Peninsula, it’s not quite as common down in the Hamilton area. You’ll see what makes this area so interesting once you hit the trails!

Offering 7 kilometres of hiking trails, Eramosa Karst Conservation Area is a great spot to get out and stretch your legs. The area offers three main routes: the Karst Features Trail, the Meadows Trail and the Bobolink Trail – all of which are fairly straightforward. With the longest loop being 2.3 kilometres, it’s easy to spend an hour or a full afternoon exploring the area’s unique natural gems!

One thing that’s fantastic about the Eramosa Karst Conservation Area is that the trails are all quite flat with little elevation gain. This makes it a great spot for family hiking in Hamilton as well as beginners. Even avid hikers like myself will have a great time exploring the various geological features throughout the area! 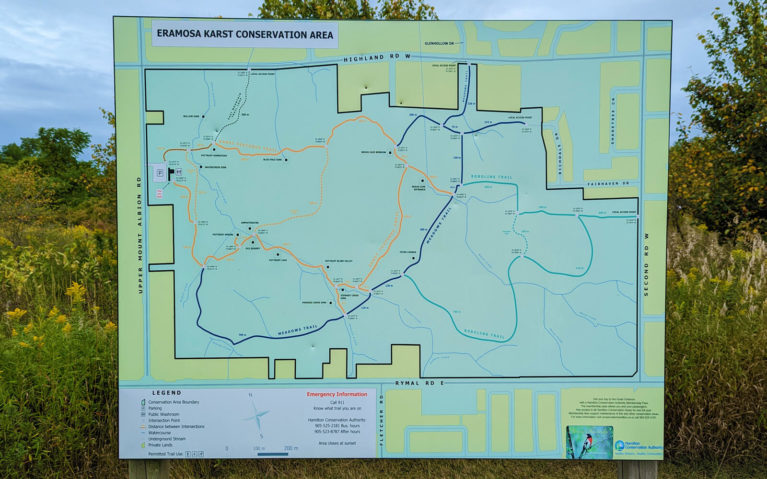 If you’re going to tackle any of these Hamilton hiking trails, I recommend the Karst Features Trail. It is 2.3 kilometres in length and takes you past the different karst features within the park! Following the orange trail on the map above from the main entrance, I recommend heading right, this way you save the coolest geological formations for last. Gotta build that hype, right?

Your first stop along the trail will be the Amphitheatre. You’ll see a semi-circular depression in the landscape and this ridge of rock is the top of the Eramosa Escarpment. It’s not nearly as tall as the Niagara Escarpment (only 30 metres at its highest point) and the majority of it is hidden beneath the surrounding soil. This was an easy spot to acquire dolostone rock to build barns and homes back in the day, which is why it’s shaped in a semi-circle.

Keep following the trail and soon enough, your eyes will spy the Potruff Cave. This cave is a karst window, created as the roof collapsed into the cave beneath it (pictured below). While there isn’t a whole lot to explore, it’s neat to get in there and see the various layers of stone. When it rains, a stream will form that disappears into the fissures at the base of the cave, flowing underground and reappearing at the Potruff Spring. 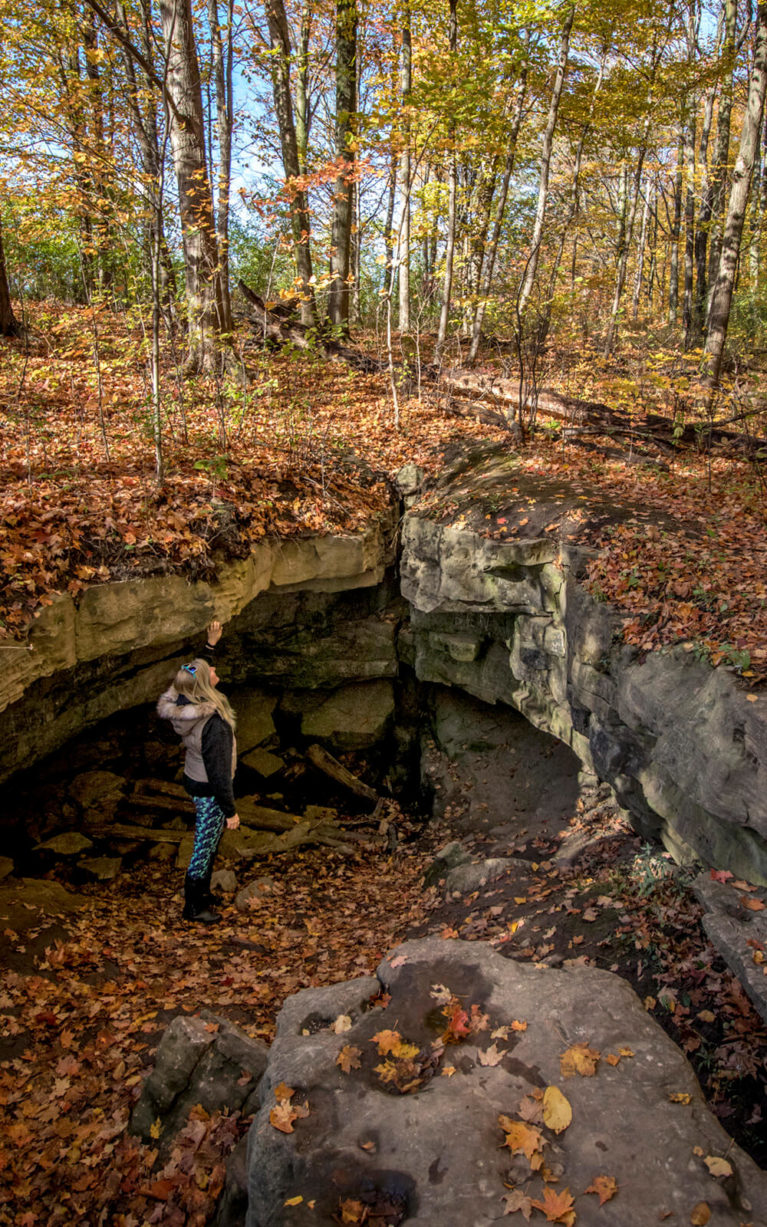 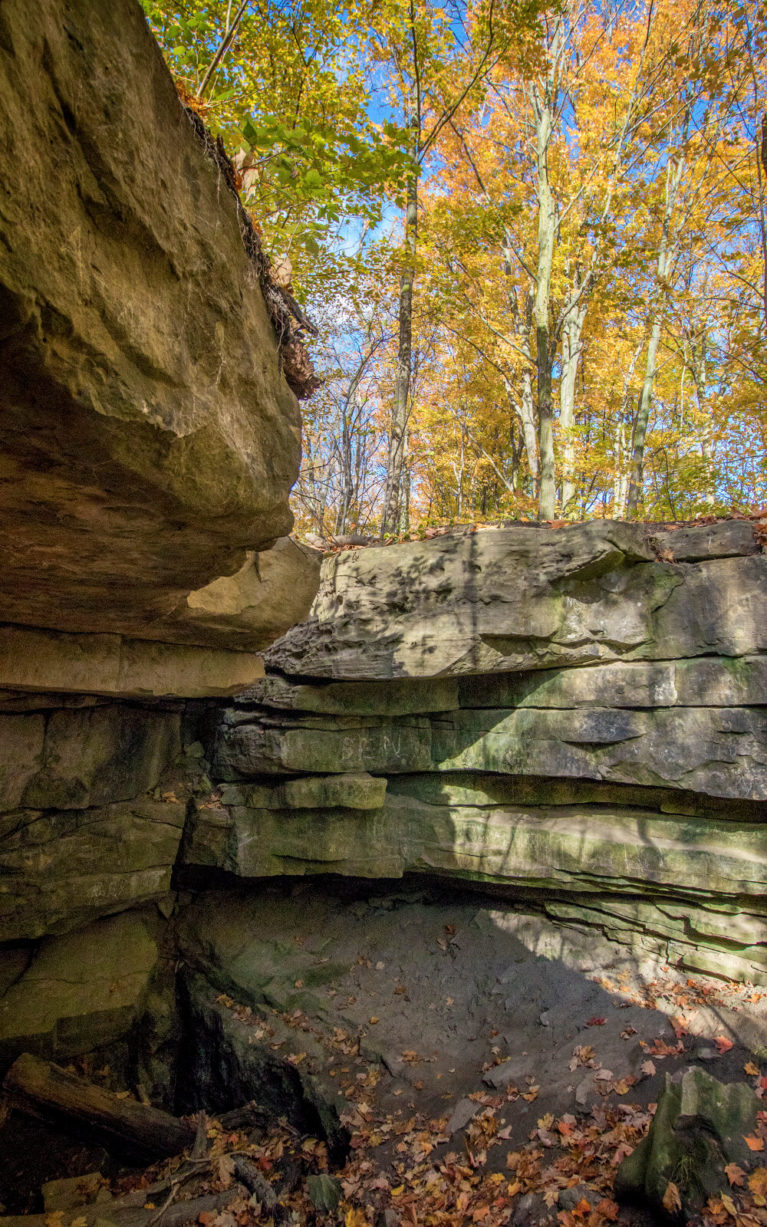 As you loop around the trail, you’ll see a post with ‘EK16’ on it as well as a connector trail. Follow this a few metres and you’ll come upon the Nexus Cave Entrance. These crevices connect through two different layers of rock, one of only three known to exist in the province! Personally, this is my favourite spot in the Eramosa Karst Conservation Area as it looks like a dinosaur took a swipe at the Earth, leaving scratches in the rock for you to explore! Hop in and take a closer look for yourself, just be careful as you do so. Once you’re done, retrace your steps back to the Karst Features Trail.

Shortly after returning to the trail, you’ll come across the Nexus Cave Window. Situated at the base of a beautiful tree, you’ll be able to peek at another section of this cave. Yes, this connects to the Nexus Cave Entrance creating the largest cave in this conservation area and the tenth longest in Ontario!

The final point along the Karst Features Trail is the Pottruff Homestead. Back in the 1800s, this area was owned by several farming families including the Pottruffs which is why you’ll see that name appear a few times throughout the conservation area. There isn’t much left to be seen other than a few ruins from what’s left of the old house and barn that Mother Nature is slowly overtaking once again. 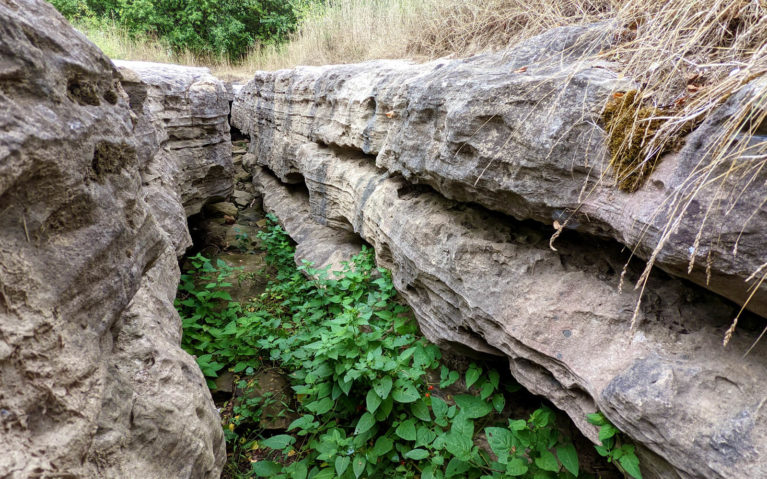 Inside the Crevices of the Nexus Cave

Explore the spacious meadows of the Eramosa Karst Conservation Area as you wander along the Meadows Trail. This 1.7 kilometre long route connects to the Karst Features Trail in two separate locations, making it a great way to extend your hike and see more of the area. It also connects to local access points so Hamilton folks can get out and explore more in their own backyard. The best time to tackle the Meadows Trail is in the springtime when all the underground streams really come to life!

For even more fun frolicking in the open spaces of Eramosa Karst, add the Bobolink Trail to your hiking route. It offers an additional 1.3 kilometres of trail through the conservation area as it connects to create a loop with the Meadows Trail. Both the Meadows Trail and the Bobolink Trail are very flat and through grassy areas, making it an easy route to explore. Consider it a walk in the park! 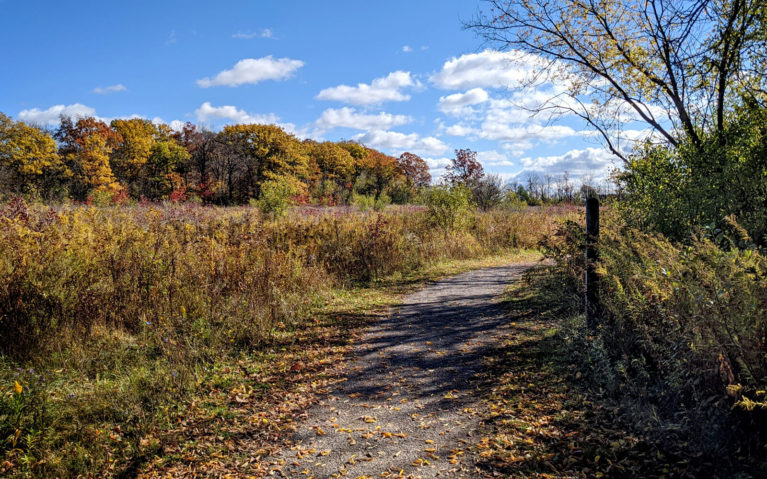 Trails Along the Meadows of Eramosa Karst

Other Things to Do at Eramosa Karst

The Eramosa Karst Conservation Area is open year-round and therefore offers a plethora of activities for visitors to enjoy. While hiking is the most obvious activity, the area is popular for snowshoeing in the winter months. I haven’t explored the area myself come snowfall but seeing how magical it is in the fall with all the beautiful colours, I’m sure it’s a gorgeous winter wonderland in January and February!

Another fantastic activity that many don’t know about is geocaching. If you’ve never tried geocaching before, think of it as a sort of real world treasure hunt. All you need is your phone and an app like c:geo to begin! Using the compass in your phone, you follow clues and try to find the “cache” (aka the treasure) as you explore. Some caches are natural wonders, others are tiny trinkets or even cleverly hidden boxes with cool goodies inside! It’s a great activity that’s a hit with folks of all ages. 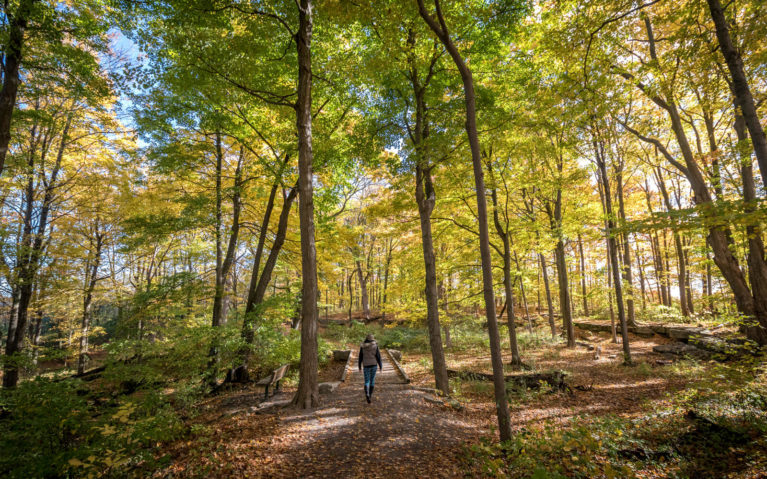 As You Can See, the Fall Colours are Spectacular at Eramosa Karst Conservation Area!

Things to Know for Your Visit to Eramosa Karst

Ready to check out Eramosa Karst Conservation Area with your own two feet? Here’s what you need to know for your adventure.

Where is Eramosa Karst Conservation Area?

Eramosa Karst Conservation Area is located at approximately 78 Upper Mount Albion Road in Stoney Creek, a subsection of Hamilton. It’s approximately 40 minutes by car from the Niagara Region and approximately 90 minutes from Toronto. Click here for directions to the main parking lot.

What are the Eramosa Karst Hours of Operation?

Eramosa Karst Conservation Area is open from sunrise until sunset, seven days a week unless otherwise posted. You can check the Hamilton Conservation Authority’s Twitter account for any up-to-date closures.

Do You Have to Pay to Visit the Eramosa Conservation Area?

There is no entrance fee but you will have to pay $7.50 for all-day parking at the main parking lot. If you have a Hamilton Conservation Authority Membership Pass, parking is free.

Are There Ticks at Eramosa Karst Conservation Area?

Unfortunately, ticks can be quite prevalent along the trails of the Eramosa Karst Conservation Area in the warmer months. I have never had an issue myself though I tend to stick to the marked trails for this reason. If you have a dog who likes to wander through the brush, this can pose an issue so be sure to do a tick check before you head home!

Looking for More Things to Do in Hamilton?
Check Out the Top Hiking Trails in the City
Explore the Best Waterfalls in Hamilton
Don’t Miss These Great Indoor Attractions in Hamilton
See Hamilton’s Spooky Side With These Haunted Stops

Don’t Forget About the Eramosa Karst Conservation Area & Pin it For Later! 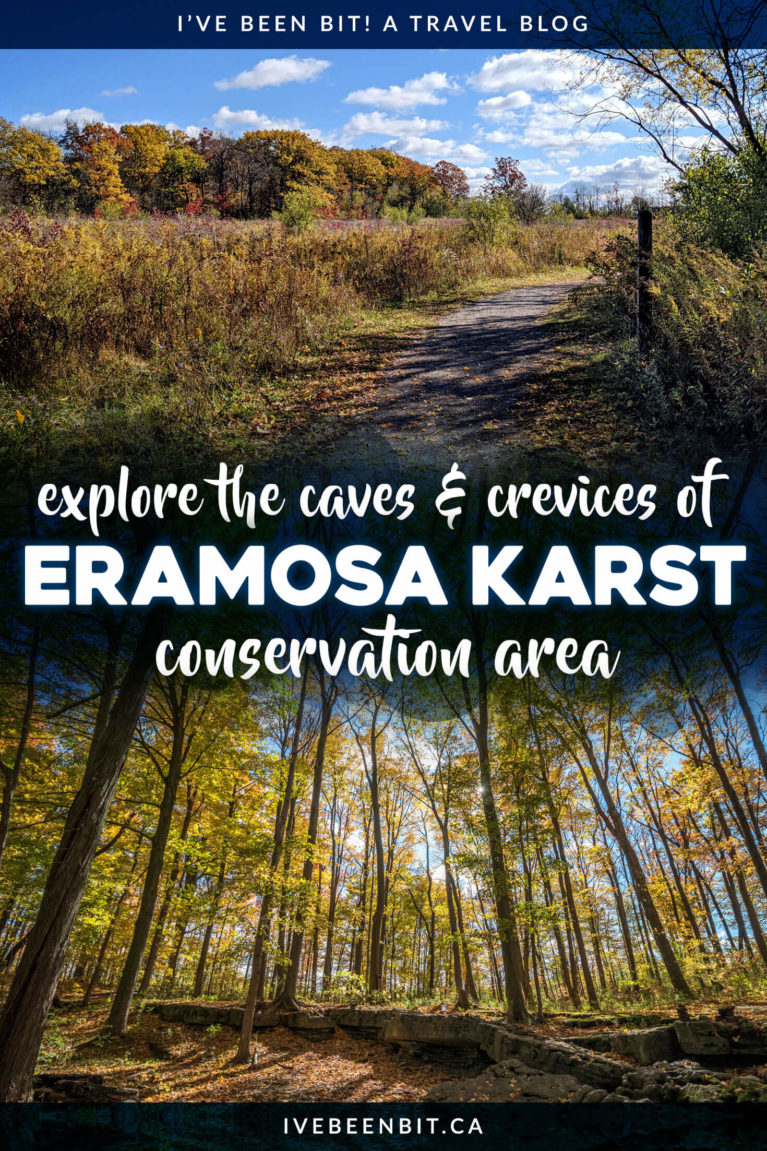 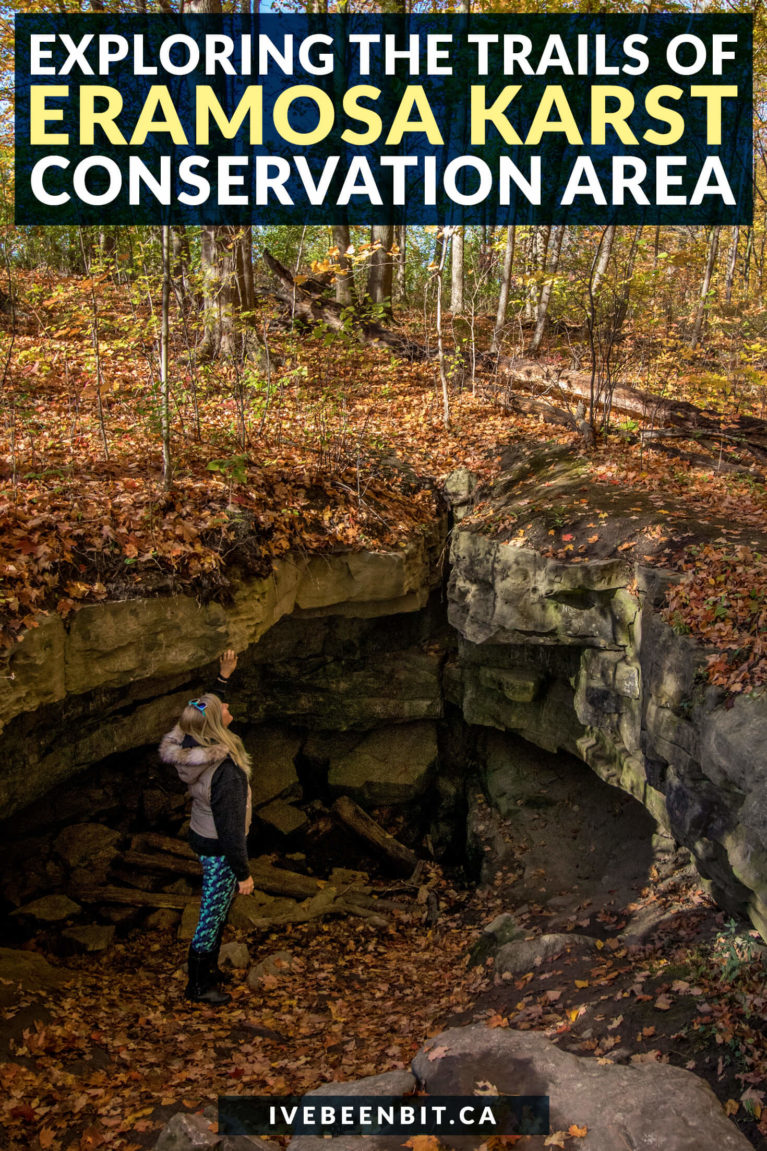 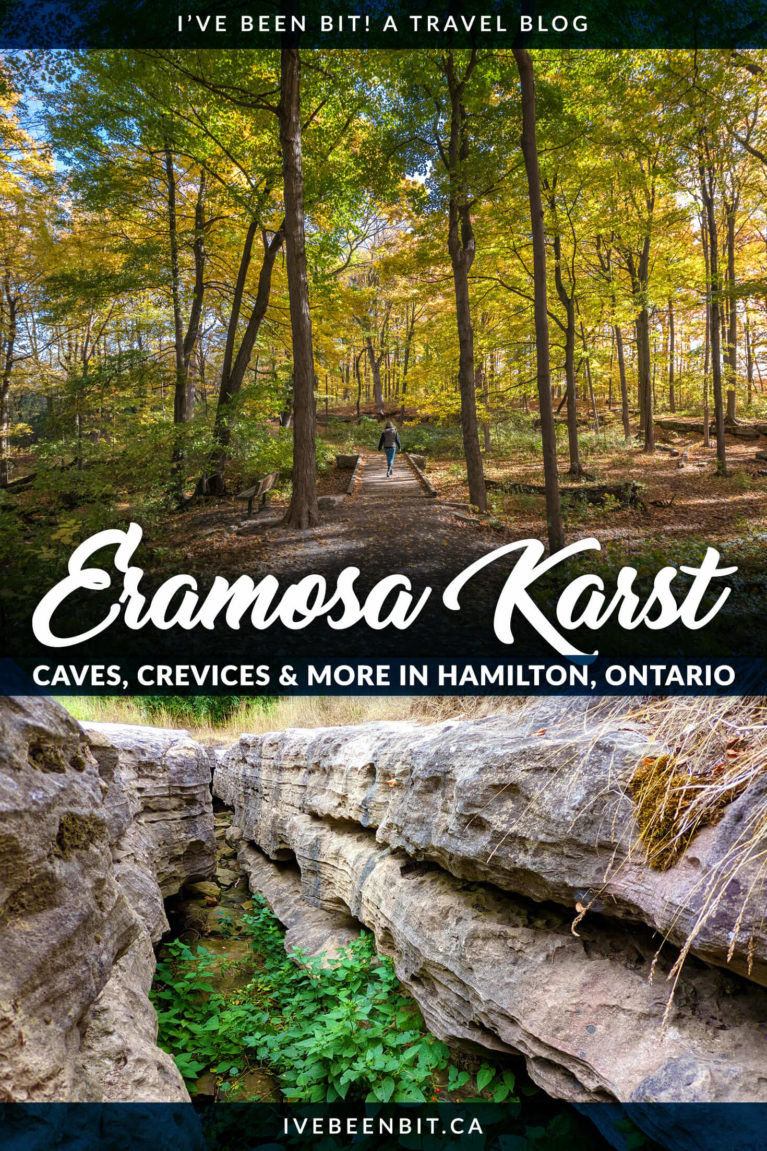