When you think of the tourism mecca that is Niagara Falls, immediately images of the Horseshoe Falls’ rushing water and Clifton Hill’s busy sights and sounds come to mind. While visitors snap away, thinking of creative ways to capture themselves with this natural beauty, they gloss over the wonder that’s just a few kilometres downstream – the Niagara Gorge. Its sheer cliffs paired with the turquoise water of the Niagara River make it a sight that’s not to be missed. Luckily there are a number of ways you can experience the Niagara Gorge!

What is the Niagara Gorge?

So what exactly am I talking about? The Niagara Gorge is an 11 kilometres long valley that separates Canada and the United States was carved out thousands of years ago by the mighty Niagara River. It begins at the base of the Horseshoe Falls until the end of the Niagara Escarpment in Queenston Heights.

It is said that almost 13,000 years ago, the crest of the Horseshoe Falls was located where the Niagara Gorge begins. The falls have slowly moved upstream due to the erosion caused by the Niagara River! It’s no wonder when 20% of the entire world’s freshwater flows at 65 kilometres per hour! Luckily engineers have intervened to divert the water, slowing erosion from 3 metres every year to just 30 centimetres in a decade.

The result of the erosion of the Lockport dolomite are the incredible cliffs you see that create the Niagara Gorge. Whether you see it from the water, hike along it or admire from the Niagara Parkway, you’ll be blown away by its beauty. 5 Ways to Experience The Niagara Gorge

I will preface this section with the fact that the Niagara River is a force to be reckoned with. It has a serious undertow and has claimed a number of lives. While you’ll be able to get fairly close to the river with some of these experiences, do not go in the water. You’d think it wouldn’t have to be said… but it does. Anyways, let’s get to it!

Descend 70 metres via elevator and walk through the tunnel leading you to the 305m boardwalk. Following the edge of the river, here you can gaze in awe at the pure velocity of the water as it travels through the whirlpool rapids.

Niagara’s White Water Rapids are rated as Class VI rapids, making them some of the wildest in the world! The river’s current here reaches speeds of almost 50 kilometres per hour. Compounded with the volume of water that is channelled through this narrow part of the gorge, this 4 kilometre stretch creates waves as tall as 6 metres! It makes Niagara’s white water rapids one of the largest and finest series of rapids in North America.

Now I have to be straight with you – there were times when I was tempted to hop the fence and nestle into a nook right beside the rapids to really get up close and personal with nature’s power contained in the waves. Nevertheless, I resisted temptation as it is actually illegal to tackle the rapids.

Up until the early 1980s, visitors could go white water rafting along the Niagara River. This has since been outlawed due to how hazardous the rapids can be. However, you can enjoy the last of the rapids from the American side as some of Whirlpool State Park’s trails like the Niagara Gorge Trail lead close to the shoreline of the Niagara River. If you can’t want to visit the United States, don’t worry as there are some trails on the Canadian side.

Now that you’ve admired them up close, let’s get a bird’s eye view of these whitewater rapids and the Niagara Gorge! Head to the Grand View Marketplace for the newest way to experience the Niagara Gorge – ziplining! Travel 670 metres (2,200 feet for my American readers) past the American Falls to the top of the observation deck at the bottom of the Horseshoe Falls.

You’ll soar like a bird as you reach speeds of up to 70km per hour! While you might be tempted to video the adventure or take photos as you go, you’ll have to securely tuck the phone away. This calls for the GoPro and a body harness if you’re looking to capture the event!

I was surprised to find out that the zipline runs all year round. Yes, you can fly through the air with the falls covered in ice and snow! You’ll want to layer up to battle the freezing wins but I guarantee it’ll be an exhilarating experience.

The Whirlpool Aero Car, also known as the Spanish Aero Car, is a cable car suspended on six interlocking steel cables. Suspended between two points on the Canadian shore, you’ll travel approximately 500m each way at about 7km/hour in one trip. Operating from 10:00am until 5:00pm from the middle of March until the beginning of November, you can enjoy some amazing views of the rapids, Whirlpool State Park on the US side, and more.

FUN FACT: The original Aero Car had an open roof but one was added to all subsequent designs. It’s a good thing too, it would be hot on a summer day!

At 250m into the air, you’ll not only get a great view of the Niagara River itself, but of the whirlpool at the end of the rapids. Here the river suddenly bends, leading the water into the narrowest channel of the Niagara Gorge. Chances are when you visit, the whirlpool will be spinning in a counter-clockwise direction. However, from midnight until 8:00am, the flow will be clockwise as more water is diverted into the Niagara River from the open hydroelectric dams.

One thing you may not notice is that you’ll actually be crossing the border into the United States on your trip not once, but twice each way! It’ll probably be your shortest international trip, but don’t worry – you won’t need your passport! Those Class VI rapids I talked about earlier? While it’s true you can’t go white water rafting on them, you can tackle them with a Whirlpool Jet Boat Tour! The Devil’s Hole Rapids along the Niagara River see waves of up to 6 metres high, currents of over 30 kilometres per hour so it’s no wonder they’re rated Class VI. Luckily Whirlpool Jetboat Tour’s custom fleet of ships can tackle these waves with ease!

You have two options for your 45-minute tour. If you’re willing to get soaked (if it’s a hot day or already raining in Niagara, why not?), I recommend going for the full adrenaline rush on their open-top jet boat aptly named the “wet jet tour”. Don’t worry if you’d rather stay dry, the jet dome tours have you covered. If you do go for the wet jet tour, be sure to bring a spare change of clothes! Wearing a bathing suit underneath isn’t a bad idea either.

This is home to some of the best hiking trails in Niagara Falls and probably the Niagara Region. The Niagara Glen has four kilometres of trails at your disposal. It might not seem like much, but it’s easy to spend a solid afternoon hiking the gorge as there’s so much to see!

RELATED: Looking for other hikes to explore in the area? Check out these top hiking trails in Niagara Falls!

Here you’ll find one of the last pristine expanses of Carolinian Forest in Canada. This is due to the Great Lakes creating a warm and humid climate which is unlike most of the country. Be sure to pop by the Niagara Glen Nature Centre for more information about the area.

While the Niagara Glen is beautiful all year round, it truly shines in the fall. The warm colours of the autumn leaves contrasting against the turquoise waters of the Niagara River is absolutely magical. If you plan on doing this Niagara Gorge hike (which you should), wear proper footwear as the terrain is rough. Be sure to stay hydrated and stay away from the water! What’s Your Favourite Way to See the Niagara Gorge?

While the Horseshoe Falls steals many hearts and has people travelling from all over the world, I have to say the sheer cliffs of the Niagara Gorge never cease to amaze me. It’s incredible to think that the thunder of the Niagara River created this massive canyon!

Does this give you a new perspective for your next visit to Niagara? Which of these activities would you want to experience first? If you’ve done any of them, which is your favourite? Whatever your answer is, we can all agree that the Niagara Gorge is a magnificent natural wonder in Niagara Falls.

Additional Places to Explore in the Niagara Region
30+ Charming Things to Do in Niagara-on-the-Lake
Chase Some Waterfalls Across the Niagara Region
Enjoy a Glass at The Best Wineries in Niagara
Check Out One (or More!) Of the Niagara Region’s Best Hikes
Explore the Top Hiking Trails in St Catharines
Take a Hike at the Woodend Conservation Area
Hike Through Short Hills Provincial Park, Niagara’s Largest Park
Explore the St Johns Conservation Area in Fonthill
Follow the Bruce to the Beautiful Rockway Falls in Lincoln
Don’t Miss This Self-Guided Tour of Vineland’s Wineries
The Top Beamer Memorial Conservation Area Hiking Guide
Celebrate the Region’s Liquid Gold at the Niagara Icewine Festival
Things to Do in Port Colborne, Niagara’s Ship Shape City
Plan a Spring Visit to See the Cherry Blossoms in Niagara

Planning to Visit the Niagara Gorge in Niagara Falls Canada? Pin It for Later! 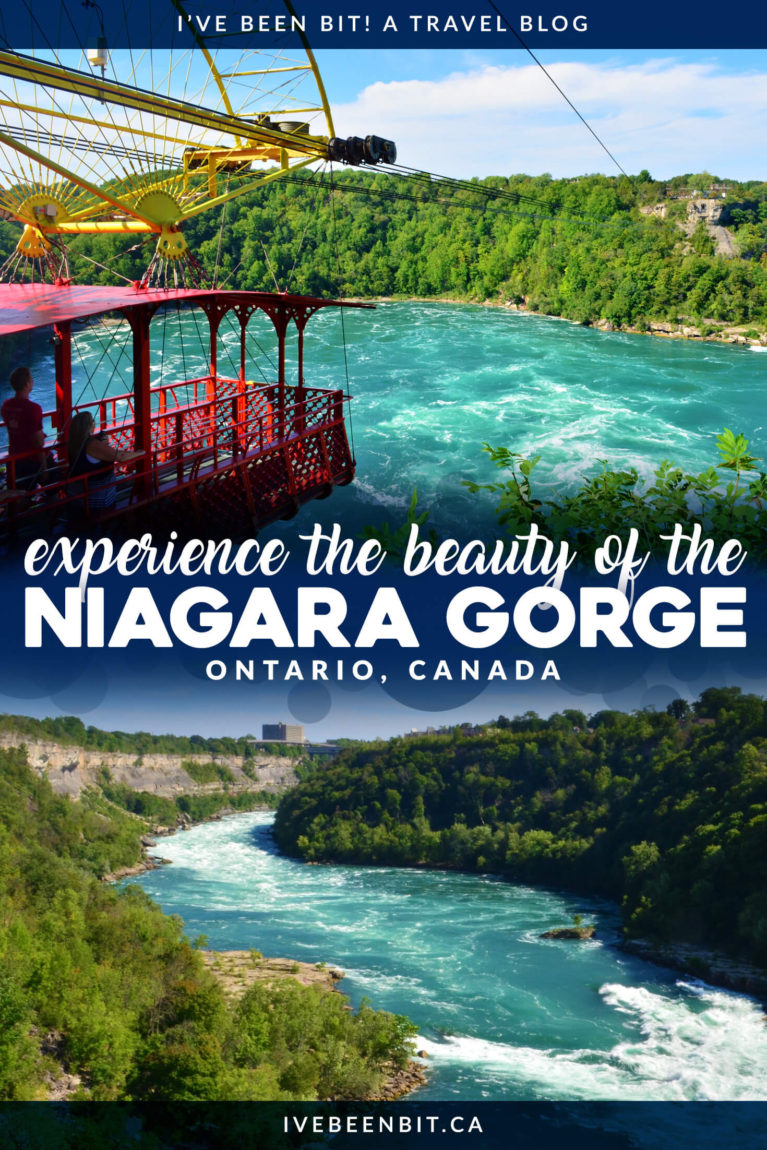 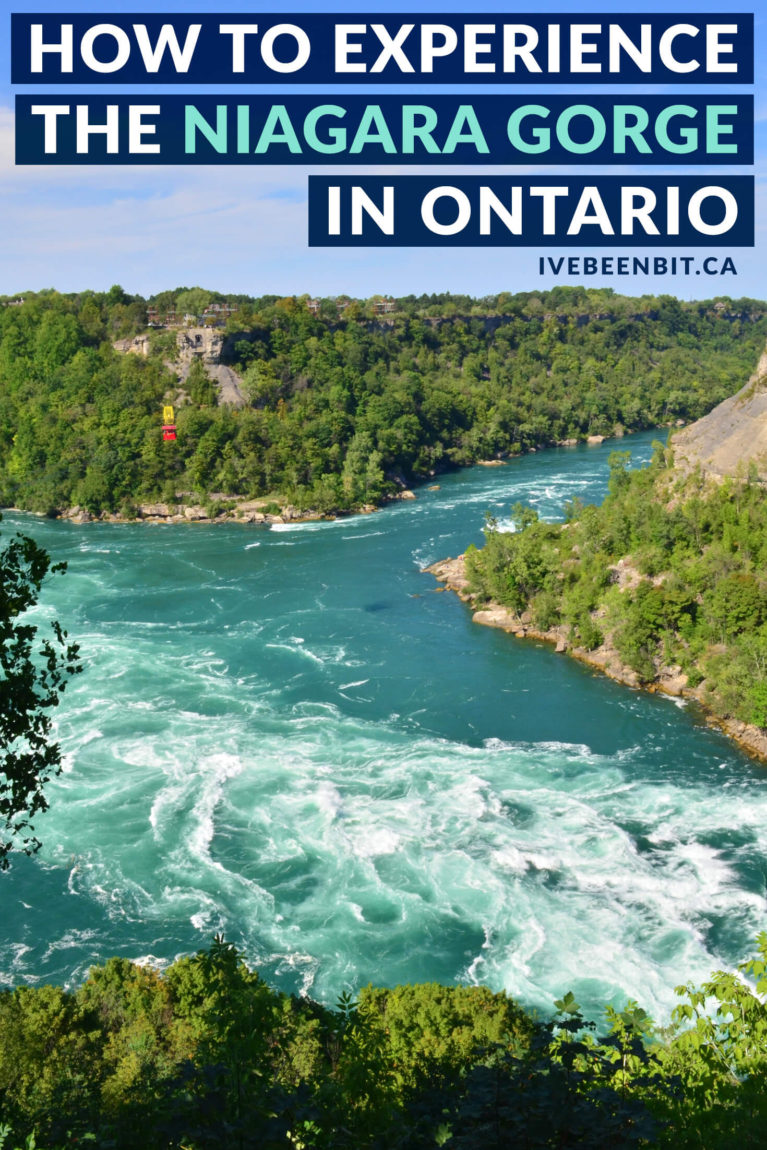 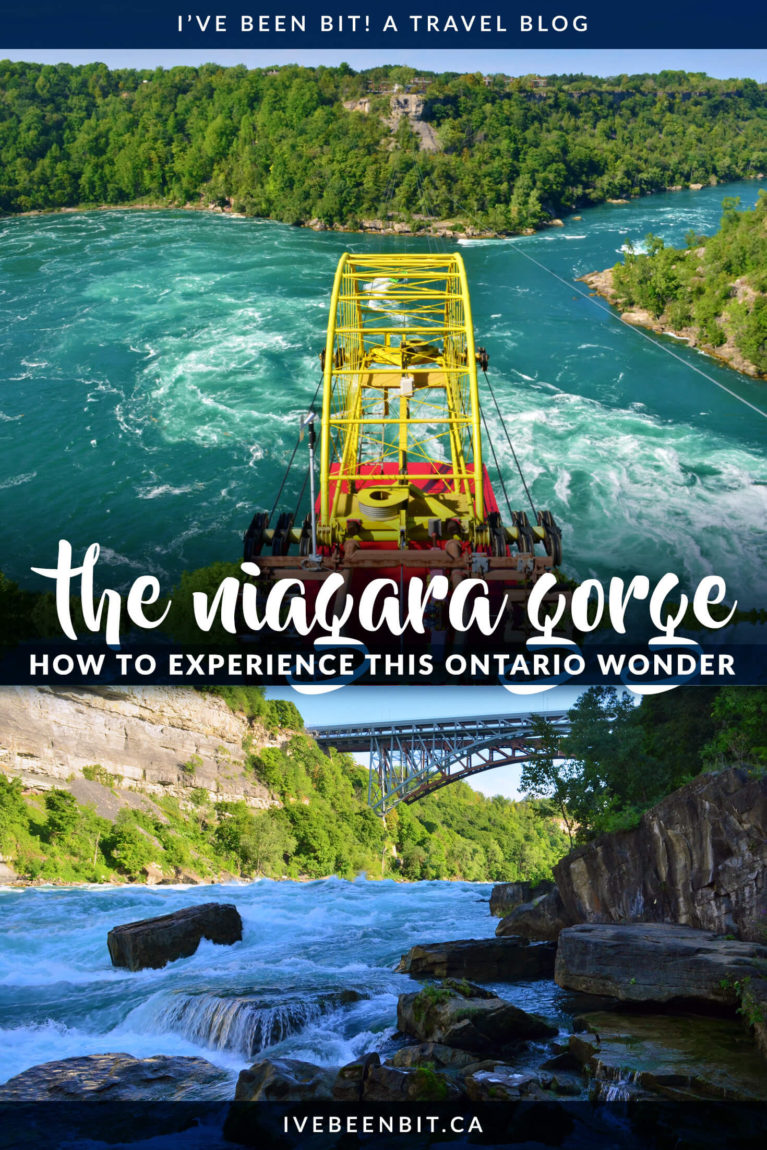 The Niagara Gorge: 5 Ways to Experience This Natural Wonder was last modified: June 18th, 2021 by Lindz